Mozart showed prodigious ability from his earliest childhood.  Already competent on keyboard and violin, he composed from the age of five and performed before European royalty.  At 17, he was engaged as a court musician in Salzburg 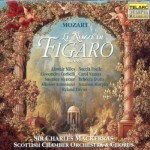 Le nozze di Figaro, ossia la folle giornata (The Marriage of Figaro, or The Day of Madness), K. 492, is an opera buffa (comic opera) composed in 1786 in four acts by Wolfgang Amadeus Mozart, with a libretto in Italian by Lorenzo Da Ponte, based on a stage comedy by Pierre Beaumarchais, La folle journée, ou le Mariage de Figaro (1784).