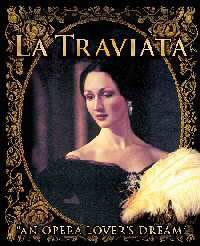 La traviata is an opera in three acts by Giuseppe Verdi set to an Italian libretto by Francesco Maria Piave.  It is based on La dame aux Camélias (1852), a play adapted from the novel by Alexandre Dumas, fils.  The title La traviata means literally The Fallen Woman, or perhaps more figuratively, The Woman Who Strayed.  It was originally entitled Violetta, after the main character.

“Libiamo ne’ lieti calici” (“Let’s drink from the joyful cup”) is a famous duet with chorus from Verdi’s La traviata, one of the best-known opera melodies and a popular performance choice (as is this opera itself) for many great tenors.  The song is a brindisi, a lively song that encourages the drinking of wine or other alcoholic beverages.